How Rock Salt Is Mined 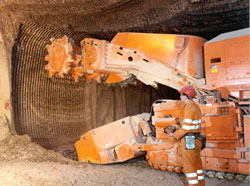 The largest salt mine in the UK is at Winsford in Cheshire and is an ideal example of how rock salt is sourced. It's history goes back to the early 1840s when prospectors searching for coal came across the large deposits of rock salt.

When the mine was opened it had just two shafts, both of which were 4 square feet and lined with timber. The miners and their materials were lowered into the mine in buckets with the excavated rock salt coming to the surface in these same buckets. These two vertical shafts remained in use until the 1970s when they were sealed. An impressive 130 year span of daily usage.

These original shafts were replaced by shafts 3, 4 & 5.

Shaft Three as with all subsequent shafts is circular and used for personal access with a depth of 163m (550ft). Although originally the descent was made in cages running on steel rail guides, the lift was replaced in the 1970s by a fixed self-service lift. Similar to the lifts found in car parks and large buildings, fixed lift cage lifts are unusual in a mine but the stability of the rock salt allows this. It takes approximately one minute to descend the 163m to the bottom of the mine.

Shaft Four is used for ventilation and material access and is one mile away from Shaft 3. It is also larger with a five metre diameter and deeper at 189m. The lift consists of two parts. The top part contains a personnel carrier with a seven metre high cargo compartment underneath. This is a much slower lift taking five minutes to descend. Shaft Four serves as the principal service shaft. The majority of underground equipment and materials are brought into the mine down this shaft. All major mechanical items for use underground are dismantled at the surface and placed into the cargo compartment by hoisting, transit capsules or forklifts. Once the equipment arrives at the bottom of the mine it is transported to underground workshops for assembly. Once in the mine the majority of machinary never leave it.

Shaft Five is the final shaft and last shaft to be installed. It was completed in 1973 and is used for the elevation of the rock salt. It is very similar in size to Shaft Four with a depth of 164m. The shaft consists of a winding engine with two cages which operate in balance. Each cage holds a capacity of nine tonnes.

One of the most important aspects of mining is safety. Ventilation is needed to supply fresh air in the mine so as to dilute and flush out fumes generated by diesel vehicles. Ventilation requirements can vary due to the rate of rock salt production and diesel vehicle movement, but there are minimum requirements for general daily operations. Shaft Four has two fans located at the bottom and these between deliver 135 cubic metres of fresh air per second.

Air drawn into the mine is maintained at a constant temperature of 14ºC and circulated through specially constructed air conditioning tunnels. This enables moisture contained within the air to condense in a controlled manner, minimising the effects on the mine.

Once the air has left the air conditioning tunnels it is directed to the faceline, from where it begins a nine hour journey around the mine workings. The salt beds at Winsford provide a very safe natural environment without methane and gas issues which can occur in collieries.

Since the mine opened the extraction of the salt has been via a square-patterned room and pillar method of mining. This leaves pillars of rock salt behind to support the roof structure. Work is carried out by staff of the Mining Department at Newcastle University to monitor the structure of the mine as it is the nature of rock salt to move over time and this must be constantly monitored. Over a long period of time the results from these investigations and other measurements have provided a wealth of knowledge when deciding on the size of pillars in new mining zones. This system means Winsford does not have to use roof bolting, metal mesh or pillar supports. 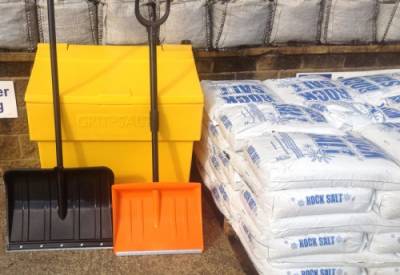